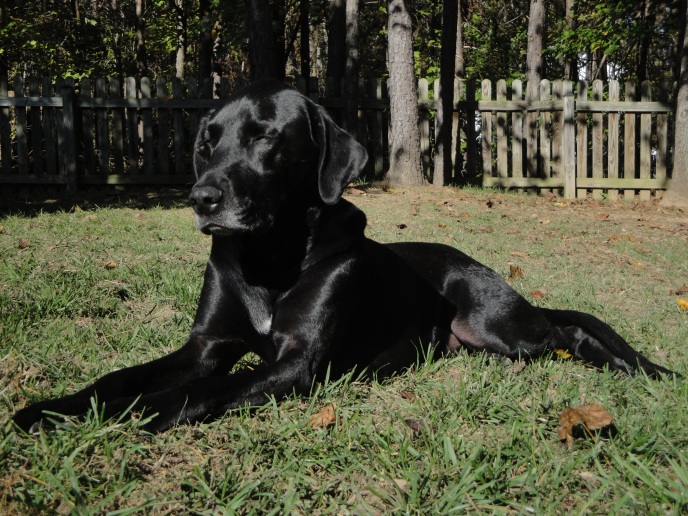 Poor Yoshi. Our 99 pound Great Dane/Labrador Retriever has always been sensitive. It’s become worse since we rescued a little (comparatively; she’s 35 pounds) mixed-breed female in November of 2016. Yoshi is ten while the rescue, Sachiko, is not yet two. Yoshi’s always been light on his paws – twinkle-toes – but is slowing down; Sachiko is all sugar: pure sweetness and high energy.

I came home from work today and was surprised that Yoshi didn’t greet me as he normally does. Instead, he hovered in the background, whining, while Sachiko jumped all over me. My wife told me he had been whining off and on all day. I realized quickly that he was feeling anxious around Sachiko. She gets in his face wanting to play, barks at him, scampers around and under him, and generally plays the nuisance. Yoshi gets a certain look on his face that screams anxiety!

So, I took Yoshi downstairs to my office/music room. He was a different dog right away. He still trembled slightly, but that eventually passed (with the help of ice cubes – his favorite treat!). He’s chilling out now and hasn’t whined since we came down here.

We may have to let Yoshi hang out downstairs now, bringing him up to go outside and to eat and drink. That’s the only thing I can think of now, short of tranquilizers. I don’t want a doped-up doggie, though, and I don’t want to tone down Sachiko; she’s a puppy: this too shall pass. The photo speaks volumes. Yoshi, in the rear, is definitely standoffish around Sachiko and it shows. In the featured image at the top, Yoshi is wearing boots for his sensitive paws – he has allergies, and posing with his two brothers, Yukio, in the center, and Tobi (wan Kenobi).

Dogs do have personalities. Yukio is a scamp, while Tobi is regal, aloof, confident. Poor Yoshi; I couldn’t love a dog more than I do Mr. Sensitive 🙂